There are many benefits attributed to Kombucha – an age-old fermented tea drink that has been around (in various forms) for centuries in many different cultures.

Kombucha is a traditional fermented drink made of black tea and sugar. It contains a variety of vitamins, minerals and enzymes and has been prized by traditional cultures for its health-promoting properties.

More specifically, Kombucha is a sweetened tea that is fermented with a SCOBY (a symbiotic colony of bacteria and yeast) to become a nutrient-rich beverage. The fermentation process takes 7-12 days depending on temperature and the strength of the SCOBY. The SCOBY consumes over 90% of the sugar during fermentation, resulting in a low-sugar finished product. This process is similar to what would happen in sourdough bread or milk/water kefir.

Once a very obscure drink, Kombucha is now a popular beverage that is available at most health food stores and many local grocery stores. Many people also brew at home using various methods including the batch method and continuous brew.

The SCOBY: a Colony of Microbes

The SCOBY, or Symbiotic Colony of Bacteria and Yeast, is the collection of microbes responsible for turning sweet tea into a probiotic beverage. Essentially, it is a living colony of beneficial organisms that turn sugar into healthful acids and probiotics.

SCOBYs are often called “Mushrooms” and are the reason Kombucha is sometimes called “Mushroom Tea.” On a practical level, a SCOBY is an unattractive rubbery disc that covers the surface of the brewing liquid to seal it off from the air. This allows fermentation to happen in an anaerobic (air free) environment.

You may also hear a SCOBY called “The Mother” as it is the parent culture that creates the tea. During the brewing process, the SCOBY also often creates a “baby” or secondary culture on top of itself, which can then be used to brew other batches.

If properly taken care of, a SCOBY can last for many years. In fact, I know a couple of families that have generations-old strains of SCOBYs that have made many babies over the years. 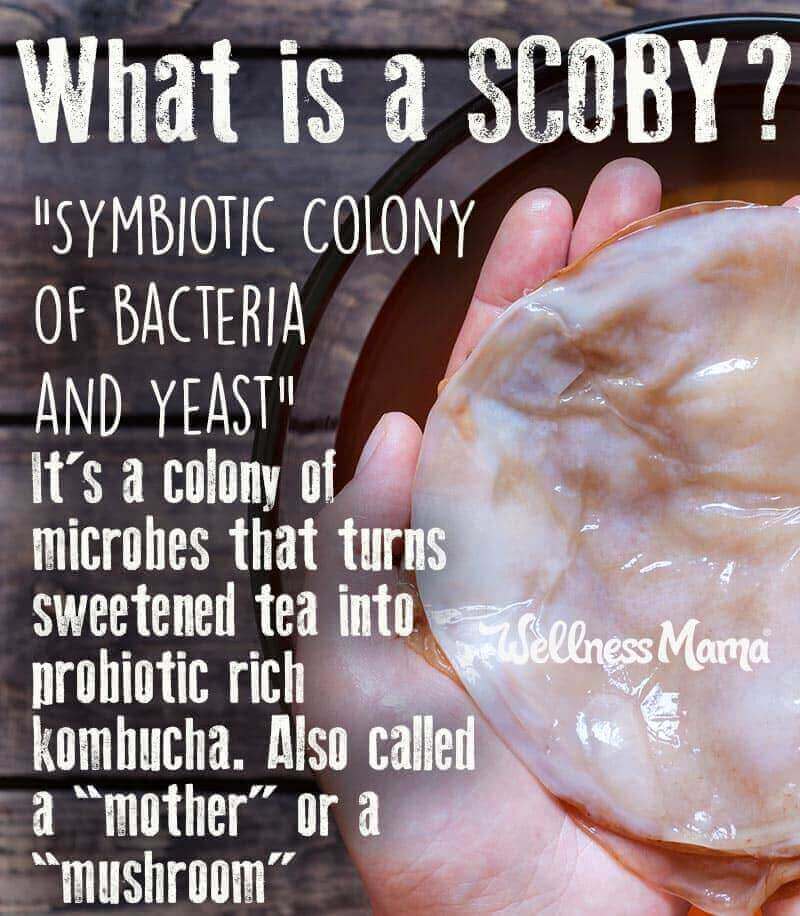 As mentioned, this tangy fermented beverage contains beneficial probiotics and acids. It is lower-calorie than other carbonated beverages like soft drinks, with only about 30 calories per cup (8 ounces). Kombucha is fat-free and does not contain any protein.

One cup does contain about seven grams of carbohydrates and about 20% of the daily value of B-Vitamins, according to the label of the popular GT brand. Eight ounces also provides: 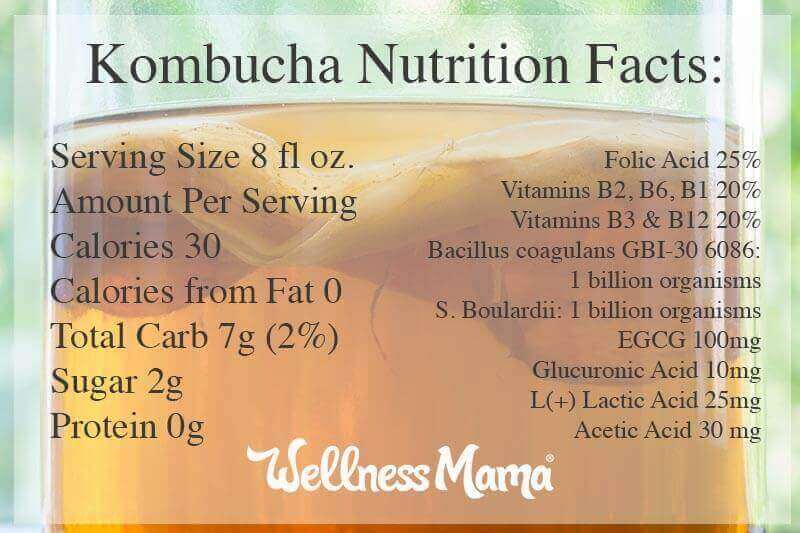 This fermented tea has a slightly sweet and slightly tangy flavor, reminiscent of a shrub or vinegar based drink. The flavor varies widely by brand and homebrew method. Finished kombucha tea can also be flavored in a process called secondary fermentation by adding juices, fruit or herbs.

This ancient health tonic is attributed with several health benefits. The nutrients it contains are wonderful at supporting the body in various ways. It is important to note that while there is an abundance of anecdotal evidence from avid supporters, studies about kombucha are lacking. But then again, so are studies about flossing, but everyone seems to be pro-flossing.

To be clear- it isn’t some magic pill or silver bullet, but it may help the body function well by supporting:

These benefits could be partially due to the concentration of beneficial enzymes and acids present in kombucha, including  Gluconacetobacter, Lactobacillus and Zygosaccharomyces.

The research is still out on the specific way Kombucha affects digestion, but we do know that it contains probiotics, enzymes and beneficial acids and these have been researched for their health benefits.

Harvard Medical School explains that a healthy gut will have 100 trillion + microorganisms from 500 different identified species. In this sense, we truly are more bacterial than human. There has been a lot of emerging research on the dangers of an overly sanitary environment and how overuse of antibiotics and antibacterial soaps and products is literally changing the structure of our gut.

Drinks like Kombucha, Water Kefir, Milk Kefir, and fermented foods like sauerkraut contain billions of these beneficial bacteria, enzymes and acids that help keep the gut in balance.

The liver is one of the body’s main detoxification organs. Kombucha is high in Glucaric acid, which is beneficial to the liver and aids its natural detoxification.

Kombucha is naturally high in antioxidants and supportive of the immune system. Again, there is no magic pill or silver bullet when it comes to immune function- it is best to support the body in its natural immune process.

It contains a compound called D-saccharic acid-1,4-lactone (or DSL for short) that has amazing antioxidant properties. This compound is not present in unfermented teas (though many teas are high in other antioxidants). DSL has been specifically identified as beneficial for cellular detoxification.

Kombucha is a natural source of compounds called glucosamines, which are often recommended for joint health and to alleviate joint pain. Glucosamines naturally increase hyaluronic acid in the body and helps protect and lubricate the joints. In some trials, hyaluronic acid provided relief similar to over the counter pain killers.

Kombucha is a great alternative to sugar-laden drinks like soda. It is naturally carbonated. This means that the secondary fermentation process naturally produces bubbles and carbonation. Sodas, on the other hand, are artificially carbonated by forcing carbonation into the liquid.

This fizzy fermented tea is an attractive alternative to other carbonated beverages and provides probiotics and nutrients not present in soda. Kombucha also contains less sugar than soft drinks. The sugar in the recipe is simply the food for the beneficial bacteria and is largely consumed during the fermentation process.

Important Caveat About The Benefits

I originally wrote about this age-old brewed tea drink years ago, and since that time, I’ve seen thousands of posts claiming it cures everything from cancer to wrinkles. It is important to note that there are no confirmed studies about kombucha’s benefits and safety.

At the same time, there are anecdotal reports of its benefits and many people love its taste and the energy it gives them. Don’t expect kombucha to solve your health problems, but it is a great refreshing drink with some added probiotics. 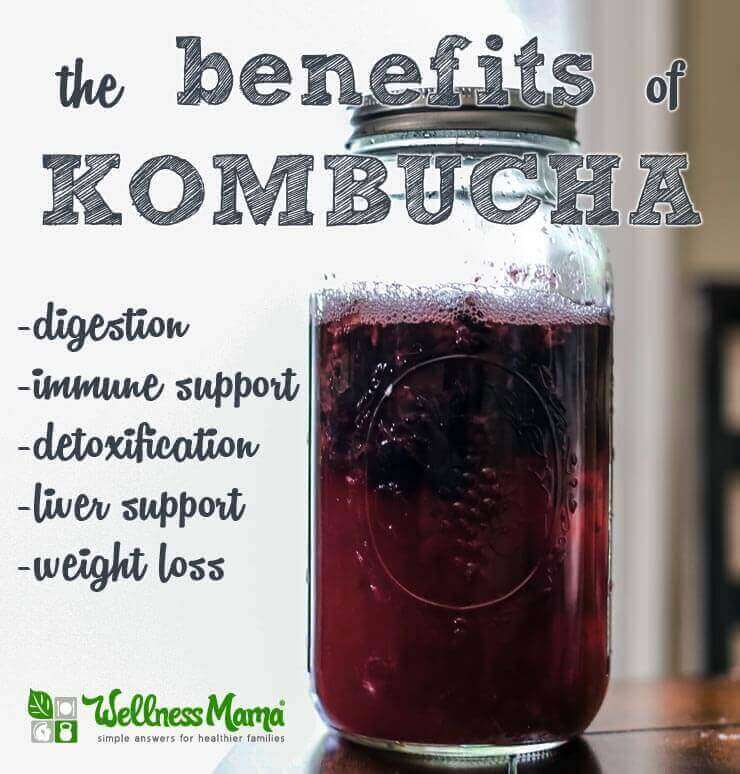 Potential Risks and Side Effects of Kombucha

I love this ancient fermented tea and drink it often, but there are some cautions and side effects to be aware of when consuming it.

The most logical concern I’ve seen with Kombucha is its potential to cause dental problems. Since it is high in natural acids (but still lower than most sodas) it can be harmful to the teeth. OraWellness wrote a great article on the specific way kombucha affects teeth and how to consume it without harming your teeth.

These steps may also help reduce the potential for the acids in kombucha to affect teeth: drink it all in one sitting, don’t sip it throughout the day, and swish with clean water (don’t brush) right after.

The base for kombucha is black tea, and some people have concerns about its caffeine content. The amount of caffeine in kombucha varies quite a bit based on the type of tea used and the steep time. In general, it is considered to have less caffeine than soda or coffee. Caffeine content also decreases during fermentation, so the longer the ferment, the less caffeine typically left in the brew.

If caffeine is a concern, there are several ways to reduce the caffeine content:

It is generally not recommended to use decaffeinated tea for kombucha as the caffeine is often removed through a chemical process and the residue may kill the kombucha SCOBY.

Sugar is used in making kombucha, and for this reason many people are concerned about the sugar content in the finished tea. Fortunately, the majority of the sugar ferments out during the fermentation process. Because the sugar is the food for the bacteria, it is not possible to make without any sugar at all. For this reason, sugar substitutes like stevia and xylitol do not work either.

Kombucha does contain a very small amount of alcohol, which has been a source of much controversy in recent years. Sources estimate that store bought brews contain 0.5% to 1.0% alcohol. To put this in perspective, a person would have to drink a six pack of kombucha to approach the alcohol in a single 12oz beer. In fact, a bottle of kombucha would have a comparable alcohol content to an over-ripe banana.

Store bought brew containing over 0.5% alcohol must be labeled as such and often an ID is required to purchase it. Homemade kombucha also typically contains more alcohol than store bought, though still not much.

How to Make Kombucha

If you decide to venture into the world of homebrewing kombucha, the process is simple, but nuanced. Check out this full tutorial for a full explanation of the process and other methods.

How to Make Kombucha at Home to Get the Many Benefits

Kombucha is an age-old fermented tea drink that may help improve digestion and is a natural source of antioxidants and benefitical enzymes. Make kombucha at home with this easy recipe.
CourseDrinks
Calories240kcal
AuthorKatie Wells

Like this recipe? Check out my new cookbook, or get all my recipes (over 500!) in a personalized weekly meal planner here!

Where to Get a SCOBY and Supplies:

If you decide to make your own, it is important to get the SCOBY and supplies from a high-quality source. Find a local friend who already brews and ask for an extra SCOBY. I also highly recommend Kombucha Kamp, a small family-owner company run by my friend and affiliate partners Hannah and Alex. They carry SCOBYs, tea, sugar and all necessary supplies.

Where to Get Kombucha

Don’t want a jar of fermenting tea sitting on your counter perpetually? You’re in luck.

Kombucha has gained popularity in the US recently and is now available in many stores. There are dozens of really good brands and if you choose to buy it, just look for an organic variety without a large amount of sugar or added ingredients. Some of my favorite pre-made brands are:

As I mentioned, kombucha contains probiotics and beneficial acids, yet it also has some cautions and side effects. There are many other foods and drinks that are natural sources of probiotics and that don’t carry the same risks.

While kombucha is delicious, I’d also suggest branching out into other healthy probiotic foods and drinks like: sauerkraut, water kefir, beet kvass, or homemade ginger ale. These are all great probiotic foods to add to your diet: 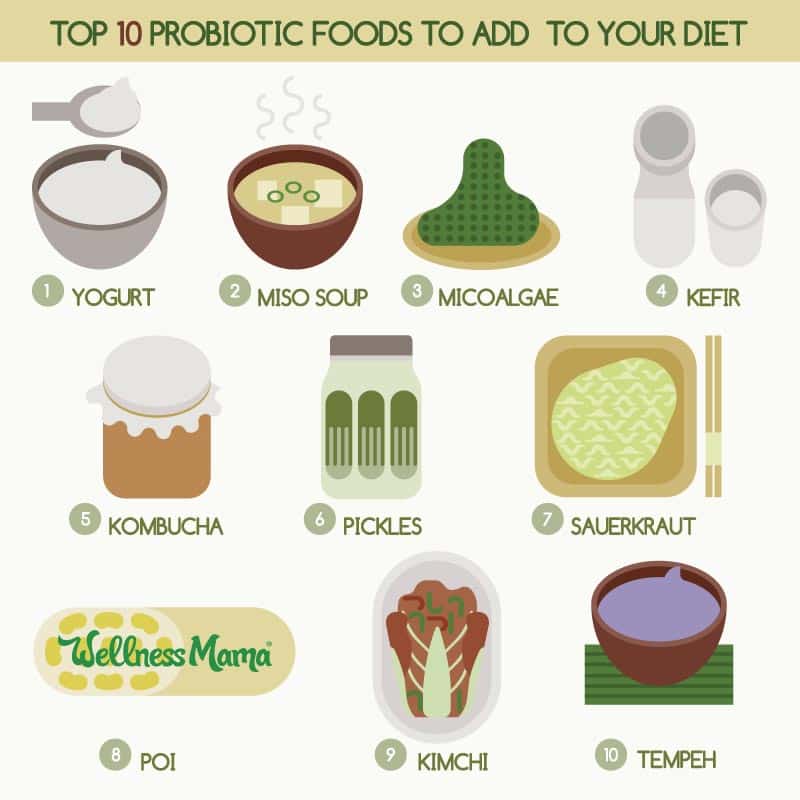 Many people love Kombucha because of its taste. The internet abounds with anecdotal stories of its benefits. Research doesn’t yet support its health-promoting properties, but it is generally considered safe to drink if from a reputable source.

We do know that it is a good source of probiotics, enzymes, and beneficial acids, and a decent source of B-vitamins. It can be made at home or found in many stores. It may not be a silver bullet for health, but it sure is tasty!

Like with any raw/fermented product, those with any health condition or who are pregnant/nursing should check with a doctor before consuming.